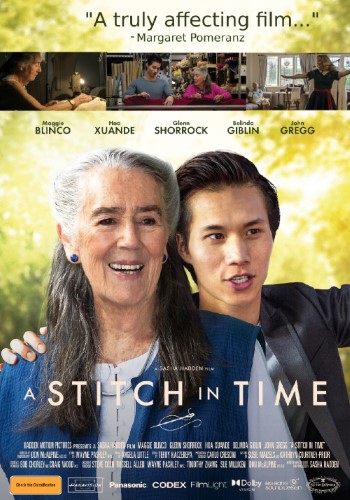 When Liebe's partner Duncan (founding frontman of Little River Band Glenn Shorrock) loses his job singing at the local pub, Liebe throws herself into helping Duncan realise his dream to record an album.

Inspired by Hamish, Liebe decides to make clothes again to support Duncan financially, but quickly reignites a long-forgotten passion for her craft. With Duncan intent on shutting down her dreams, Liebe packs her bags and moves in with her best friend, Christine (television and theatre favourite Belinda Giblin), and her unsuspecting husband, Justin (John Gregg: Bodyline, To End All Wars), to reclaim her life and discover where she belongs.

From the executive producer of Ladies in Black and writer/director Sasha Hadden, and expertly shot by cinematographer Don McAlpine ACS ASC (The Dressmaker, Moulin Rouge!) A STITCH IN TIME is an ode to the power of community and friendships that come from the most unexpected places. Liebe's touching story will remind audiences of all ages that it is never too late to follow your dreams.